Rocketts Landing residents who live in our historic Cedar Works building not only experience a part of Richmond's past (Cedar Works once manufactured ice cream freezers and decorative woodenware) -- they also get to peruse their own private art gallery in the building's lobby! Curated by Meredith Timberlake, whose parents live in Cedar Works, the gallery features both up-and-coming and established Richmond artists in rotating exhibits. And their current show "Beecycles" by Matt Lively is not to be missed. 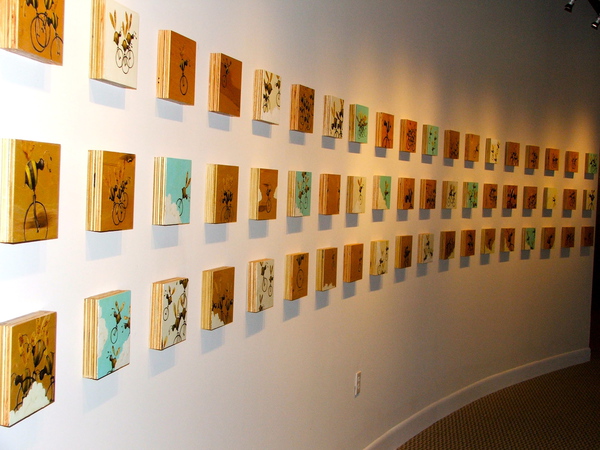 When Matt, a Richmond native, began painting flying bees on unicycles a few years ago, he never expected to have an entire show dedicated to them. The bees first took shape as a sculpture, which Matt soon realized wasn't the right medium. Then, the bees started filling empty spaces on canvases, providing compelling character against various backdrops. So, when Meredith invited Matt to showcase his art in the Cedar Works Gallery (his fourth curated show with Meredith), he knew the time had arrived to give the bees a chance to shine, or rather, fly on their own and tell their stories. 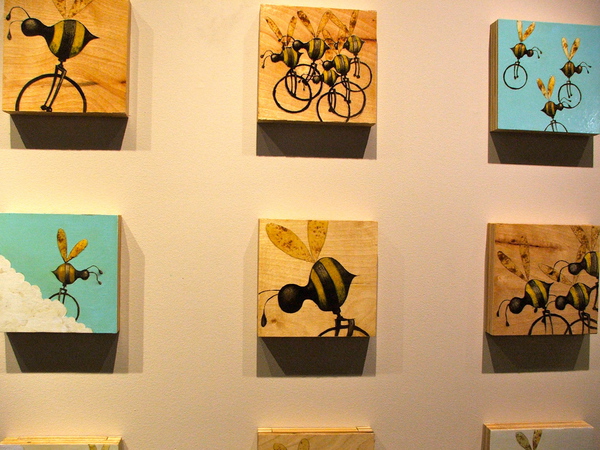 Sixty wooden panels line the Cedar Works lobby wall and feature various bees riding unicycles: some ride solo, some cycle in groups, some fly through clouds and others sail across a wooden sky. And, though each panel’s detail is different, they all showcase Matt’s playful yet technical expression. 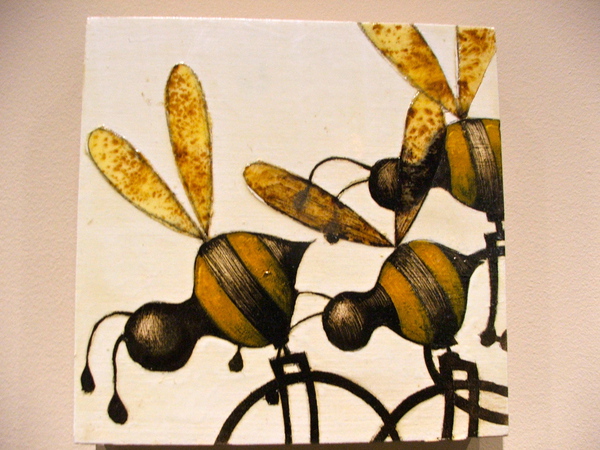 As an artist, Matt predominately works out of his studio located in a 130-year-old barn and moves between various mediums depending on the season and his mood. In the winter months, he tends to do drawings and screen prints. In the summer, he works with wood, tar, oil and varnish, which he describes as “real cavemen-like” tools. Overall, he tends to focus more on the art as an entity rather than how the art will affect others.

“I don’t have a lot of control over other people’s feelings,” Matt describes. “So, I rarely think about [how my art will affect viewers] when creating a show. Within a half second, if the art looks interesting [to me], then I know it’s alright.”

Matt has various side projects that keep him busy: He teaches art at both Virginia Commonwealth University and the Virginia Museum of Fine Arts, and starts each day working on his “Squiggle This” projects, daily drawings based on a squiggle drawn by family, friends and strangers (which are also pretty impressive, so be sure to check them out!). After completing the drawing, he then sends the image over to local writer Janet Freisner who completes the picture’s story in words — and they’ve done so every day for nearly a year.

In the end, though, Matt says capturing just a snippet of a story is his work’s real strength. “Learning to stop before the painting reveals too much is the most delicate aspect of my process,” he explains. And with “Beecycles,” we believe he’s perfectly achieved his goal. 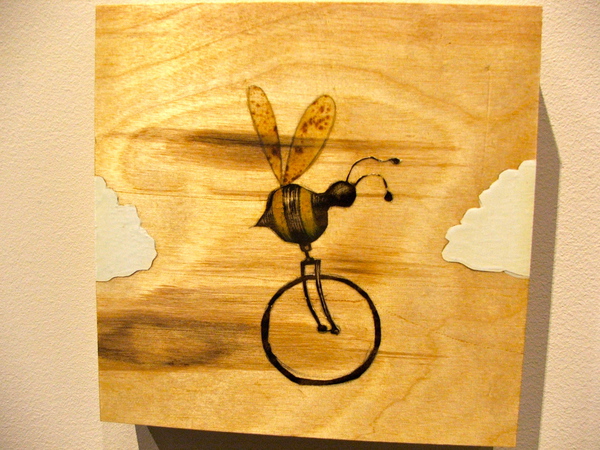 As a private gallery, “Beecycles” is closed to the public. But, Cedar Works residents’ and the artist’s friends and family members are invited to attend the opening reception this Thursday, July 12, between 6:00 and 8:00 p.m. You can also view more of Matt Lively’s work at his current showing in the Adam Cave Gallery in downtown Richmond or by visiting his website.