There's no doubt that Richmond's mighty James River is one of our city's greatest assets — it's also a beloved feature of our community at Rocketts Landing, providing the background for a plethora of river events, weddings and activities. So, when we found out about a new event series that's striving to increase awareness of the James River as a public asset at our neighboring Intermediate Terminal, we had to find out more!

As the brainchild of Replenish Richmond’s Rick Tatnall and Ralph White (RVA's former director of the James River Park System), the Sugar Pad Project's aim is to "transform this underutilized portion of the riverfront into a public asset that people of Richmond can be proud to call their own."

The Sugar Pad is a concrete dock and popular local fishing spot located at the Intermediate Terminal directly beside Rocketts Landing (in between our community and Great Shiplock Park. And for old-school Richmonders, it's the site where the Annabelle Lee used to dock.). Owned by the City of Richmond, this public space has been sitting mostly unused for years, causing it to fall into a state of decay and decline. But thanks to inspiring visionaries like Replenish Richmond — and the City of Richmond's approved Riverfront Plan (note: PDF) — this overlooked space has new life breathing into it. 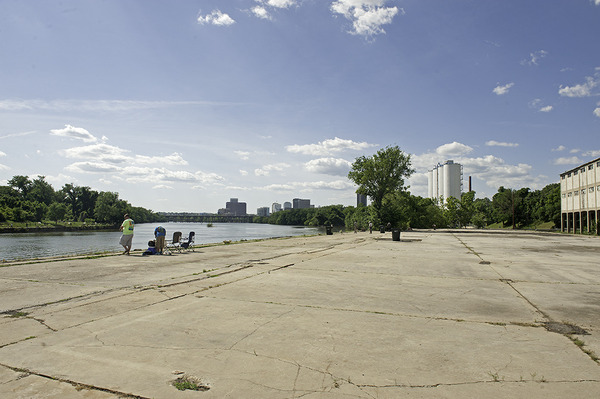 And the Full Moon Series is leading the way!

Launched this past June (and envisioned for years by Rick and Ralph), the Full Moon Series invites the public to the Sugar Pad once a month to watch the full moon rise over the James River and RVA skyline (from personal experience, these moon rises are stunning!). The gathering also includes poetry performances, drumming, fire pits — and whatever other creative inspirations people want to bring!

So far, Tatnall has hosted two Full Moon gatherings, and the last meetup attracted around 150 people.

"One of the biggest reasons we're doing the Full Moon Series is because the City's Riverfront Plan talks about the value of events down at the Intermediate Terminal," explains Rick, "but it was used once, and the city hasn't really used it since. With the Sugar Pad Project and Full Moon Series, we hope to raise awareness of the river access here and show, functionally and visually, how the community can use this great public space." 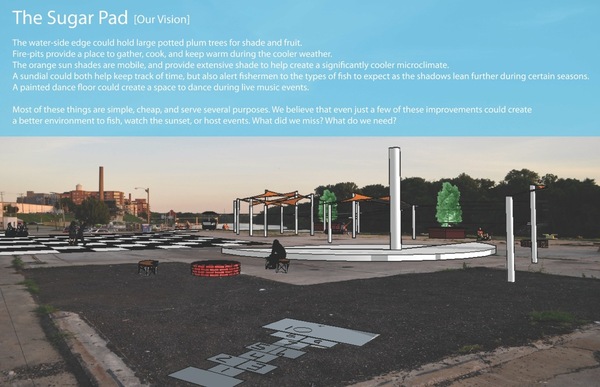 A rendering of how the public can reinvent and use the space (notice Rocketts Landing in the background). Photo courtesy of Replenish Richmond

To prepare the Sugar Pad for gatherings, Rick has dedicated his free time to improving the spot. As a one-man volunteer effort, he's removed weeds and trash from the terminal, installed picnic tables, built makeshift brick firepits, cleared 90% of the main path — and even goes every Wednesday evening to take the Sugar Pad's trash to the street for weekly pickup.

But his efforts don't stop there. Rick says he envisions public art installations, such as a sundial sculpture that could also display the shifting fish populations with changing currents. Or perhaps artists could use the space for painting and creating new works, drawing inspirations from the river and city skyline. The Sugar Pad could also host pop-up restaurants, food trucks and vendor fairs. Really, from Rick's perspective, the sky's the limit. 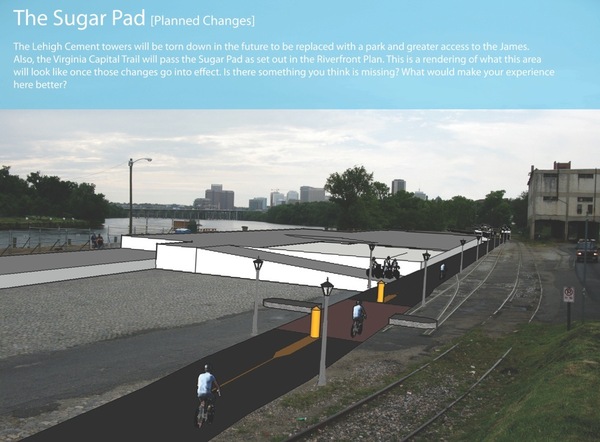 A rendering of the Intermediate Terminal with improvements and the Virginia Capital Trail running beside the docks. Photo courtesy of Replenish Richmond

The next Full Moon Series at the Sugar Pad beside Rocketts Landing is this Sunday, August 10. Free and open to the public, you'll be able to watch a beautiful full moon rise over the river, listen to local poets and drummers (who'll do back-and-forth conversational-like drumming between the Sugar Pad and Ancarrow's Landing directly across the river), learn about the Riverfront Plan — and celebrate with your fellow Richmonders all that makes our James River such a wonderful community asset! 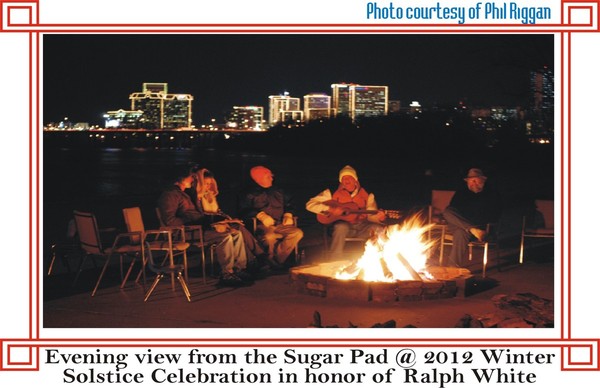 To read more about Rick’s efforts at the Intermediate Terminal — and get involved (either as a volunteer or to coordinate your own public Sugar Pad events) — be sure to check out Replenish Richmond. As a direct neighbor to the Intermediate Terminal and supporter of the Riverfront Plan, we're genuinely excited to see this spot get some much needed attention and use! Thanks to Rick for all he's doing to make the Sugar Pad and Richmond the best they can be. 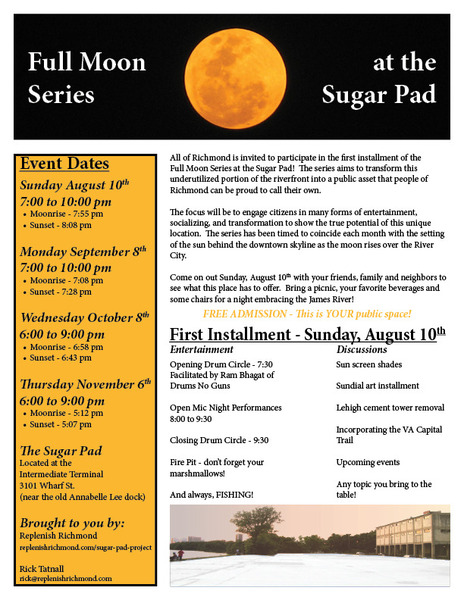