Oh, the mighty James River. It's America’s Founding River, an RVA lifeline and our community’s anchor. And for the first time in history, the James is being captured in a 360-degrees view of all its flowing glory! Thanks to local organizations James River Association (a Rocketts Landing–based organization), RichmondOutside.com and Terrain360, the entire 348-miles-long James River is currently being mapped with 3D panoramic pictures — which is a first for any river in the United States. The project traveled right along Rocketts Landing, and intrigued with their story, we had had to find out more! 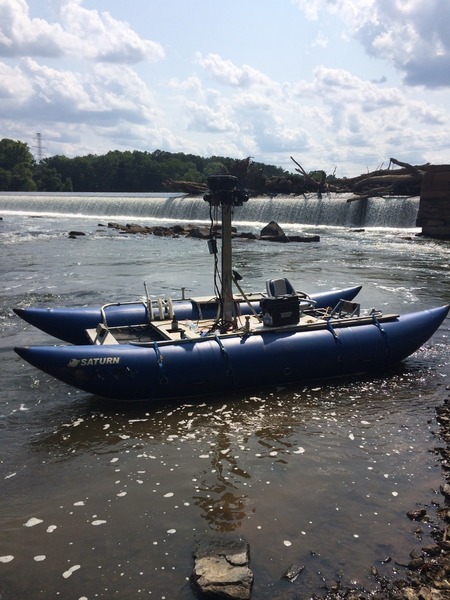 
Mapping the James River from start to finish was the brainchild of RVA-based Ryan Abrahamsen of Terrain360 and Andy Thompson of RichmondOutside.com. They came up with the idea in early 2014, and knowing the James River Association’s (JRA) focus — and recent Envision The James initiative with National Geographic Maps and the Chesapeake Conservancy — decided to pitch the concept to their folks and see what collaborations could come.

Fast forward to June 23, 2014, and the three organizations launched the country’s first-ever 360-degree-view 3D mapping project of an entire river.

“One of JRA’s goals is to connect people to the James River through recreation,” explains Justin Doyle, JRA’s outreach manager. “We think the 360 Project will offer paddlers and boaters the opportunity to explore the river from the comfort of their home.” 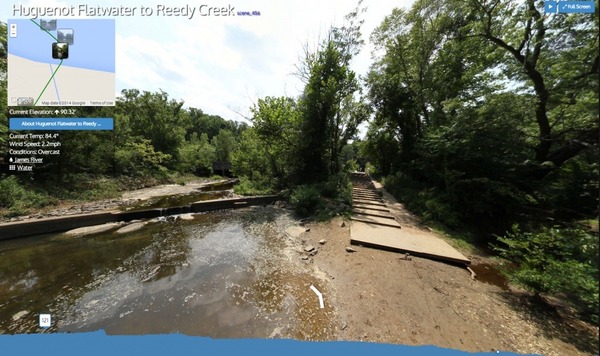 A snapshot of the James River through taken along the way to Reedy Creek. Once live, these images will complete an interactive map.

He also says the map will enable JRA to address conversation efforts by identifying areas on the James River lacking riparian buffers. These are areas of land along the riverbank providing essential wildlife habitat and natural filtering systems for the river that would have otherwise been more difficult to identify.

To complete their 360 Project, the team has needed six digital cameras, at least four people to man the boat (two people on the Upper James and two on the Lower James, with Ryan and Andy doing the latter) and nimble ingenuity.

When first launching, they thought the trip would take a few weeks. Once on the river, however, they learned quickly that navigating a 348-mile-long river in a pontoon boat rigged with tons of equipment is easier said than done. From lower-than-normal river levels to the James River’s varying widths throughout the watershed to the trickiness of protecting high-tech cameras from outdoor elements, the 360 Project is one heck of a ride.

After more than two months of adventure-filled mapping, the team has about 1.5 weeks left on the Lower James. So far, they’ve taken 60,000 high-resolution panoramic images that they’re also editing while on their river journey. They hope to have the interactive map live and ready for people and organizations to use by October.

The team rides by Rocketts Landing and captures this image of The Boathouse and Conch Republic.

As for the impact they hope to have in the world of maps?

“We think this can be the future of mapping, in that we’re still in the early stages with augmented reality where you’re actually in the map, rather than looking down on it in a traditional 2D way,” says Andy. “Our hope is to show people a new way to look at building a map.”

James River Association at Rocketts Landing is currently planning an event to celebrate the project’s completion and map’s public launch. As we learn more details, we’ll be sure to share them! In the meantime, you can learn more about the 360 project on RichmondOutside.com, Terrain360.com and EnvisionTheJames.org.